(This is as I wrote it in 2006 when I had recently discovered the truth of 9/11.  There is very little I would change now, though I might add a few things.)

The Pentagon has 18-inch thick reinforced concrete walls, and the alleged airliner cleanly penetrated 6 of these walls.  Add to that the angle of the crash and intervening pillars, and it would have had to penetrate the equivalent of about 12 to 15 feet of reinforced concrete.  Here is what happened to a plane which collided with just a bird.

There are no airplane parts visible at the Pentagon except supposedly this one, which doesn’t even resemble a part of a large airliner. 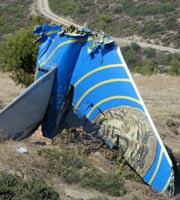 Here is the result of an airliner crashing into a mountain in Greece at full speed.  At least the tail should have been intact.

So, what did hit the Pentagon?

It could only have been a cruise missile with a super-heavy depleted uranium core to give it the necessary momentum, and shaped charges to punch uniform perfectly round holes through 6 walls in a perfectly straight line.  The entrance hole (before the wall collapsed) and exit hole 300 feet away are the same size, both too small for an airliner to pass through.  An airliner, built as light as possible, would have only enough mass and momentum to penetrate a small fraction of that.

In this govt. photo, the fire is white indicating an explosive, not orange with dark smoke as was the burning jet fuel in the towers.

Twin Towers. When earthquakes and other natural disasters topple buildings, they don’t fall straight down at near free-fall speed and are not pulverized to dust.  Massive amounts of pulverized concrete were evident from the first moment the towers began to fall.  Only controlled demolition could produce the tremendous energy needed to pulverize concrete like that.  Just dropping concrete will not do it.  Do you remember the news reports of tremendous heat and molten steel in the wreckage, which smoldered for weeks and months?  Only explosives could have been the source of so much energy.

The damage to the towers from the planes was obviously very unsymmetrical.  Why did the buildings fall straight down instead of toppling over at the point of damage?

Jet fuel burning under ideal conditions is not hot enough to weaken steel, much less melt it, and so much less because it was burning with insufficient oxygen as evidenced by the large amounts of black smoke.  Here are buildings damaged by an earthquake in Taiwan, and they didn’t fall straight down and weren’t pulverized to dust.  How could the twin towers, so strong that each withstood the collision of an airplane and showed

no signs of listing whatsoever, then fall spontaneously in the manner that they did.  Completely impossible.

CNN reported that wreckage of Flight 93 was found 8 miles from the crash site.  This does not fit with the reported events that the passengers wrested control of the plane from the hijackers and flew it into the ground.  There was either an explosion on board or it was shot down.  It is virtually impossible to make cell-phone calls from higher than about 4,000 feet, because cell phone towers by design have a limited range and their power is focused horizontally.  This story certainly appears fabricated.

There are many other facts which are circumstantial in nature, for example the bizarre behavior of Pres. Bush on that day, and why were the executive offices (where Donald Rumsfeld’s office is located) of the Pentagon not hit instead of circling around to hit a section being refurbished and not in use.  But, I have selected those publicly-known evidences which I consider to be unequivocal.  I started this study with a Google search on Pentagon “exit hole”, a good place for you to start also.

My conclusion. It was a U.S. Government inside job like Oklahoma City, Waco, and the JFK assassination.  Yes, terrorists were involved, but government let it happen and took charge of it as they saw fit.  I can only speculate that it was done to: 1) justify the war in Afghanistan and Iraq, and 2) destroy our freedoms in order to usher in the New World Order (world government).  Only under emergency conditions would Congress have passed the Patriot Act, which gives govt. surveillance powers only dreamed of by the Nazis.  When the next planned catastrophe happens, expect to find all information on the Internet not to the liking of govt. blocked, in the name of “national security”.  At that point, there will be no more freedom of expression.

To me this is earthshaking and momentous.  We have a president who has made an effot to present himself as a moral person and an evangelical Christian, and then we find him guilty of the crime of sacrificing about 3000 innocent citizens (for the greater good?), and lying about it in many different ways.  This means we can’t trust anything he or the rest of government says.  It is clear to me that those who would perpetrate this do not have my best interests at heart.  Keep in mind that the greatest crimes in history have been committed by governments (e.g. Nazis) or quasi-governments (e.g. Inquisition), for some ideal which is “for the greater good.”

There is certainly nothing we can do about it, but knowing what really happened should give us the proper perspective for living our lives in these end times.  Being skeptical of what government and big business says in other areas (e.g. vaccines, pharmaceuticals, negative spin on vitamins, irradiated food, genetically modified food) can help us to protect ourselves for possibly a while longer.

“And he deceives those who dwell on the earth . . . He causes all, both small and great, rich and poor, free and slave, to receive a mark on their right hand or on their foreheads, and that no one may buy or sell except one who has the mark or the name of the beast, or the number of his name.  Here is wisdom. Let him who has understanding calculate the number of the beast, for the number is that of a man; and his number is six hundred and sixty-six.” Revelation 13:14-18 (NKJV).  I have read that they are compiling 18-digit ID numbers for every person on earth.  Written as “123456-789012-345678”, it would be 6‑6‑6 wouldn’t it?  It appears to me that it won’t be very long before these events occur.

It all sounds very hopeless from a human standpoint, and it is, but there is hope for you personally:  “For God so loved the world that He gave His only begotten Son, that whoever believes in Him should not perish but have everlasting life.” John 3:16, and “For whoever calls on the name of the Lord shall be saved.” Romans 10:13.